Member
Have the LED H4 headlight bulbs made enough advancements that they are a direct replacement for our C10 headlight bulbs yet? anyone have good luck with a particular one?
thanks,
-tdbru
L

Member
I just replaced the stock with a Beamtech. It was plug and play and seems to work well. 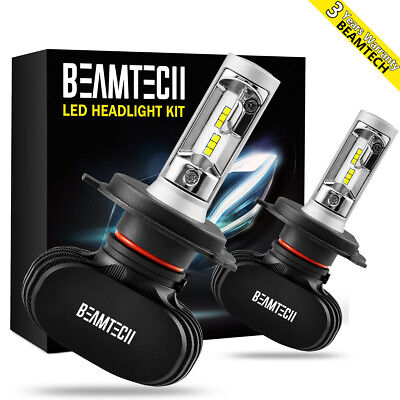 l.doyle5597 said:
I just replaced the stock with a Beamtech. It was plug and play and seems to work well.

Member
Before going to Beamtech, I tried another brand. Light was bright but blinded oncoming traffic badly as it had no cut off at the top of the light pattern.
The Beamtech solved the problem.

I didn't realize they still made them. Will order one for my C-10.

Member
thanks for the heads up. Does the CSP Beamtech H4 9003 last a long time?
-tdbru
T

Member
I have these in my bike and they are great. Plug and play and very bright.

tdbru said:
I've had mine in the bike for about 3 years. Others for longer..
Click to expand...

The beam is not so much brighter as whiter. The whiter light makes things show up better. (more contrast)
Look at the various adds. The adds all demonstrate the difference.
The beam is also higher (which makes it reach farther).
I had to adjust the beams down after the installation as they were too high and on low beam, the area directly in front of the bike wasn't illuminated. The adjustment is EZ to do.

Look at the Beamtech add again. On the outer LED you will see a small plate. That plate is what adds a cut off area to the top of the beam.
(To me) Having that cut off is pretty important as it doesn't blind oncoming drivers.
The first LED's I tried, did not have that plate.
The lights that TJK posted also have the plate. His also have small motors for cooling the lights.

Member
Those using Beamtech or other aftermarket LEDs. What did you do with the rubber light cover on the rear of the headlight? I tried trimming mine but haven't gotten it to fit well enough to stay in place.

Member
The Auxito that was posted would install like a conventional light, so no issue with the rubber cover.
The Beamtech (and others) have a removable locking ring. (Remove the ring, install light thru rubber cover, re-install ring)
Last edited: Nov 25, 2021
T

l.doyle5597 said:
Those using Beamtech or other aftermarket LEDs. What did you do with the rubber light cover on the rear of the headlight? I tried trimming mine but haven't gotten it to fit well enough to stay in place.