Member
Friend of mine that lives about 50 miles out of town showed me an old Concours hitch he had awhile back, and asked if I wanted it. At the time I wasn’t interested since I was in the process of swapping out seats that a friend of his re-upholstered for me; had no way of carrying it. That was late last year some time.

Roll forward to February of this year and wanting to put the trailer to use, I had second thoughts about the hitch. I had to remove my HitchDoc when I installed the Delkevic slip-ons I’d won at the National down in Helen. Their upswept angle just didn’t allow the hitch to stay in place. Yeah, I could modify it, but I really didn’t want to whack up a perfectly good hitch if I didn’t need to. I also didn’t want to put my stock pipes back on either, so enter the hitch my friend offered me.

I called him and it was still available. But then, the virus crap came into play in March and my wife put me under spousal house-arrest; I was never able to get back out to his place to get it – until today. Took the ride out to his place in the a.m. on the KLR, strapped the hitch to my rack, and came back home.

Unfortunately, he had no recollection of who had made the hitch, or even where/when he got it. There are some pieces missing, and it’s certainly a little different in the way it mounts. At this point, I’m not sure which way it goes, so take what you see in the pix with a grain of salt.

The two up rights are marked with an “L” and “R”, but also have a “D1” stamped on them. Kinda weird that they have two holes at the top that I assume is supposed to bolt to the bike somewhere. My HitchDoc supports has one hole and bolts to the rear bolt of the bag mount.

The rear of the hitch has a pad with 4 threaded holes that I assume some type of receiver attachment bolts to. The pad also has a “D1” stamped on it.

So, do any of you old trailer draggers have any idea who might have originally made this thing?

Because of the orientation of the "D1" on the rear pad in the following two shots, I think this is the way it is to be mounted up to the bike. 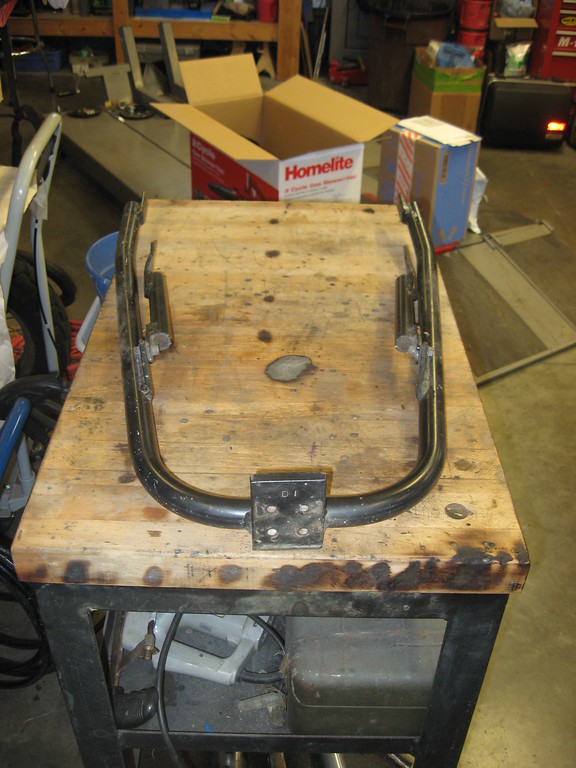 Anyone have any knowledge of this thing?

Member
Guy, i had a unknown brand hitch on my 98, but nothing like urs. My verticle supports attached at the antler bolts. And the mains attached at the muffler mounts. Is it possible that there was a swivel model that bolted up directly to the d1 rear plate with the threaded holes?

Member
Makes me wonder if it incorporated a bolt on 2 inch receiver...

Member
Mystery solved: The fella finally remembered it was for a Unigo trailer.

KH (Patrick?) - where did the image you posted of the receiver attachment come from? That has possibilities in my (new) application since I don't have a Unigo trailer and need a ball mount.
Last edited: Nov 24, 2020
G

Konehead34 said:
Guy, i had a unknown brand hitch on my 98, but nothing like urs. My verticle supports attached at the antler bolts. And the mains attached at the muffler mounts. Is it possible that there was a swivel model that bolted up directly to the d1 rear plate with the threaded holes?
Click to expand...

That's the way my HitchDoc mounts up, as seen HERE.
G

gbyoung2 said:
Mystery solved: The fella finally remembered it was for a Unigo trailer.

KH (Patrick?) - where did the image you posted of the receiver attachment come from? That has possibilities in my (new) application since I don't have a Unigo trailer and need a ball mount.
Click to expand...

Kind of a moot point now. Further perusing of their site led me to these two accessories for a ball mount:

Not going to worry about the two holes in the top of their uprights. I'll simply use the same approach that my HitchDoc uses in theirs.
G

Member
FWIW – Mounting Unigo hitch upside down allowed the Delkevic slip-ons to be cleared. I can cut some bar stock to fabricate up rights at the length so the rear height of the hitch will work best for my trailer. One of Unigo’s ball adapters will allow it to work with my Cyclemate’s swivel coupler. That problem will be solved.

But, as I feared might be the case, the hitch interferes with the bags. Their bottoms just clip the hitch and can’t go into their normal position so they can be latched. Since this hitch was a freebie, I’ve got full “artistic freedom” to modify it as I need. Think I know what I want to do, but we’ll take that on, on another day.

Member
I was just searching the web.

Member
It was labeled as a hitch for a mercedes suv, if i remember correctly. The 4 bolt pattern caught my eye..
G

Konehead34 said:
It was labeled as a hitch for a mercedes suv, if i remember correctly. The 4 bolt pattern caught my eye..
Click to expand...

Appreciate that, but I think Unigo has the ball mount solution once I figure out how to get it mounted up so it clears the Delkevic slip-on, AND the bags. The pipes are cleared, but the bags are going to require some serious cutting and shaping of the hitch so the two are compatible. Was hoping I wouldn't have to do that, but it it what it is.

As mentioned above, the hitch I am working with was a freebie, so if I initially mess it up, no big deal. We'll keep whacking on it so all fits to my satisfaction........ or , we just trash the project and move on.
G

Member
To follow up on this thread, I nsent several notes to Unigo about their ball coupler conversion, but never received a response back. Phone calls voice mails went unanswered. Decided to forge ahead anyway and completed the project.

Al of that can be seen HERE.