Member
A July ride that is on the calendar for the NW region. Fastenova plotted out a great route. lots of scenery. lots of curves. Great Lunch stop. Come join us if you can make it. The route even has us taking a Ferry ride across the Willamette river. Check it out!
-tdbru
F

Member
Thanks for posting, tdbru, and for helping run the route with me!

This is my first official COG event, though I have organized plenty of unsanctioned group rides over the years, mostly day trips but a few overnight camping adventures and a couple of week-plus trips. I had a lot of fun planning this route along some of my favorite roads in the area, and even finding some new ones.

Official event is here - please register so we know how many riders to expect. There is no cost aside from your own fuel, food, and $2 for the ferry.

Please let me know if you have questions!

Member
I'll be doing another scouting run this Saturday to verify road conditions. I also just found out the ferry is currently closed for maintenance and 5-year coast guard inspection, and it's unclear whether it will be open in time for our ride

. So I'll have an alternate route available and we'll make the call on the morning of the 23rd.

I will also be generating GPS tracks and have the COG event maestro upload them to the event page.

Member
OK! Registered.
Now finding a motel, Cheaper R Us is fine for me.
F

Member
Let me know if you need any recommendations in the area. Happy to help!
F

Member
I was able to run the route again on Saturday with tdbru, we had a blast and noted that the roads are in much better condition than in April, far less debris and gravel except for one short section on Hwy 180. It was a nice cool day, perfect for touring through the countryside, and I'm keeping my fingers crossed that we'll have similar weather on the 23rd. 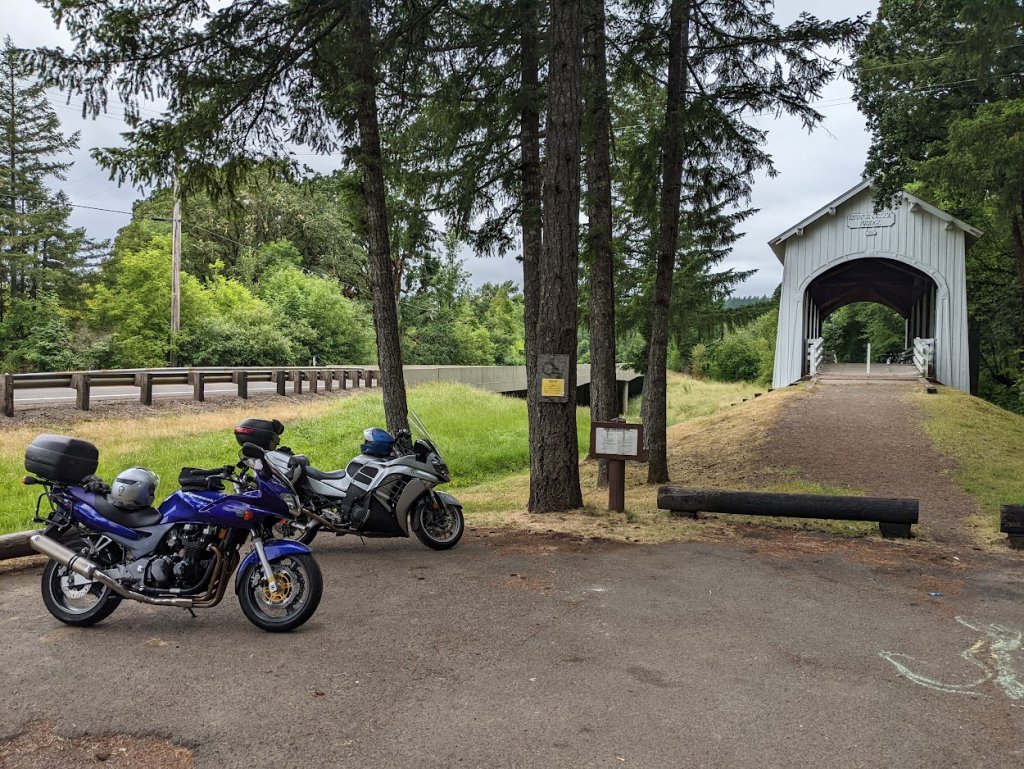 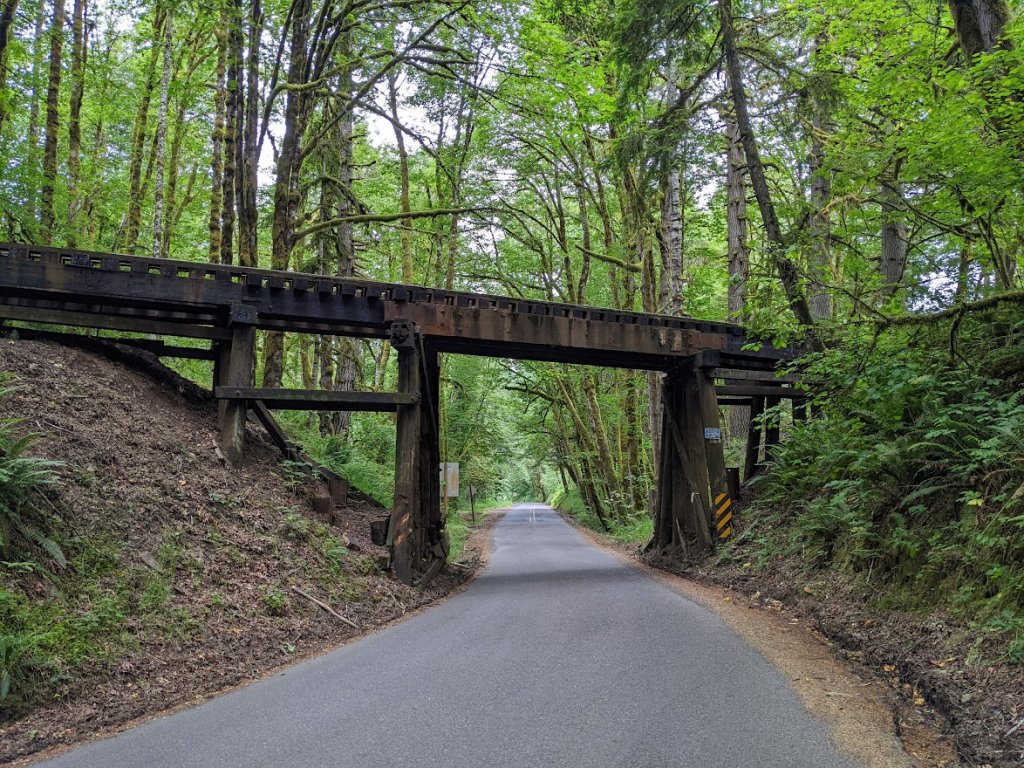 I created GPS tracks for the main route (assuming the ferry has reopened) and the alternate route (if the ferry remains closed) - these are available for download on the event page. Please let me know if you need any help getting the GPS tracks loaded and converted to a trip! I will also have a few paper copies of the route with directions printed out for those who don't use GPS.

I will check the Wheatland ferry status the day before the event, and let everyone know which route we will use... both routes are a lot of fun and should make for a great day.

I will be at the Black Bear Diner around 7:00 for a pre-ride breakfast, so if anyone would like to fill their bellies before the ride, let me know and I'll get a table for the group.

Member
Yup, I will be there at 7AM for brekie.
T

Member
fastenova,
count me in for the breakfast as well please.
thanks,
-tdbru

Member
Man, I wish I lived on the west coast sometimes. This ride looks awesome.
F

Member
Only one week until Curves to the Coast Loop! I'm really looking forward to it, and hope you all are too.

I rode a few parts of this route yesterday on my Yamaha (gasp!) and the areas I passed through all look ready for our biker gang

As of now, the ferry is still closed, so plan to use the alternate route but if by some miracle it opens up, we'll have a quick little float across the river.

For those of you coming from out of the area, safe and swift travels! Feel free to reach out to me if you run into any issues getting into town.

Member
Need to cancel my attendance.
Why does this forum ride event make it impossible for me to cancel????
F

Sorry to hear you can't make it, hopefully catch you at another event! I've noted that, but I'm not sure why you're not able to cancel... Maybe a suggestion for the COG webmaster?

Member
Was really looking fwd to the ride.
Next time then.

Member
Y'all be safe out there tomorrow.

I'm flying in to Portland on Monday for a few play days out there while my wife works. Too bad I couldn't make it out a few days early to join you all. I'll have to settle for exploring the route in the rental car.

We're looking at relocating to the PNW when I retire in a couple years. We've been out there probably a dozen times the past 5-6 years and just love it. Already scheming plans for Canyonville National 2023.
F

Member
Most of us had a great ride on Saturday! The weather was about perfect, 65* most of the morning warming up a bit in the afternoon. Traffic was fairly light in most places. We had 14 bikes total, 7 were Concours and 7 were other models. We split into 3 smaller groups and regrouped at each of the rest stops. At one of the covered bridges, we ran into a large cadre of cruisers in the middle of a poker run, enjoyed chatting with them and checking out each others bikes. After lunch, the last group had a small incident coming through the twisty section with several one-lane bridges. a rider was not able to stop fast enough for oncoming traffic and hit the bike in front of him.

Both bikes were rideable with some creative use of duct tape (Thanks @Jesal !) and able to complete the route, and both riders were uninjured. I'm not sure of the exact circumstances that led to the collision, as I was leading the first group about 10 minutes ahead of the incident... But overall this served as a good reminder that even when you're traveling in a group of experienced riders, make sure you're keeping enough following distance between you and the rider ahead so if they have to stop quickly and unexpectedly, you're able to do the same safely.

I really enjoyed making the route, organizing the ride, and appreciate everyone coming out. It was great to see some familiar faces and meet quite a few new ones!

Below are a few pictures from the day 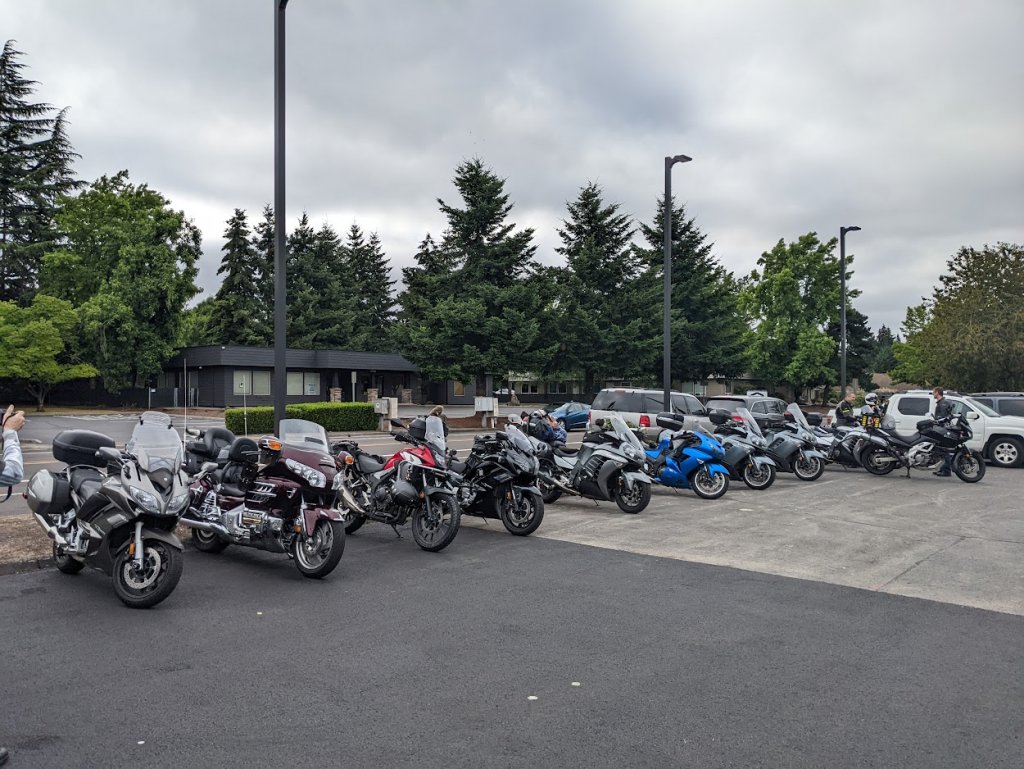 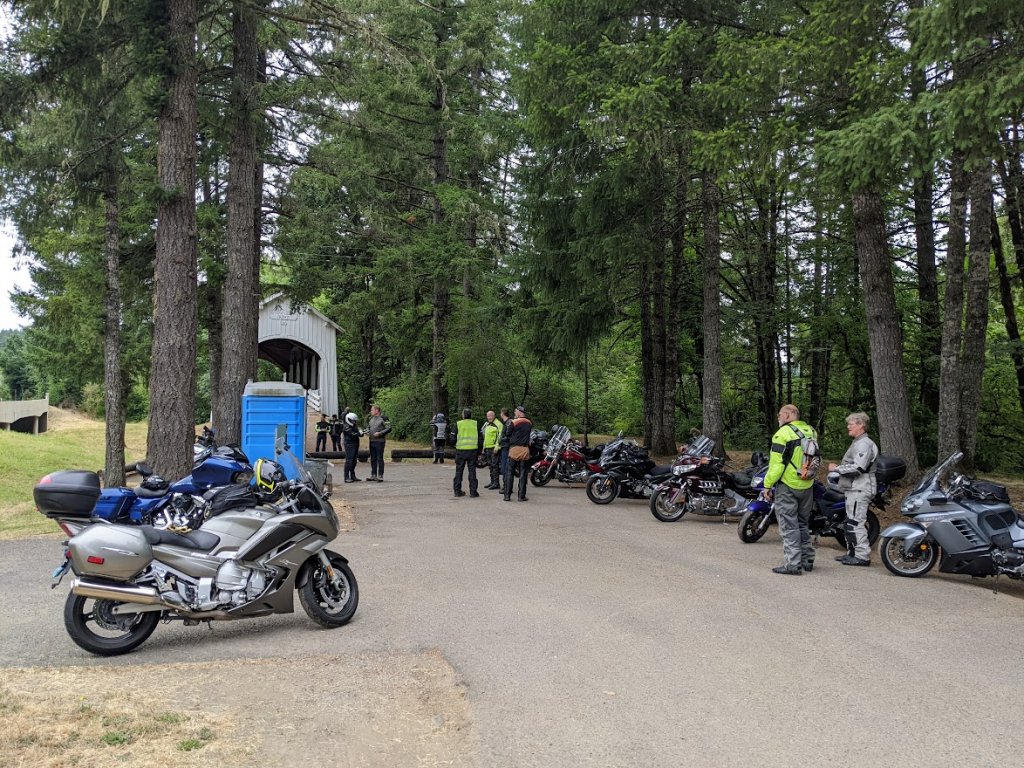 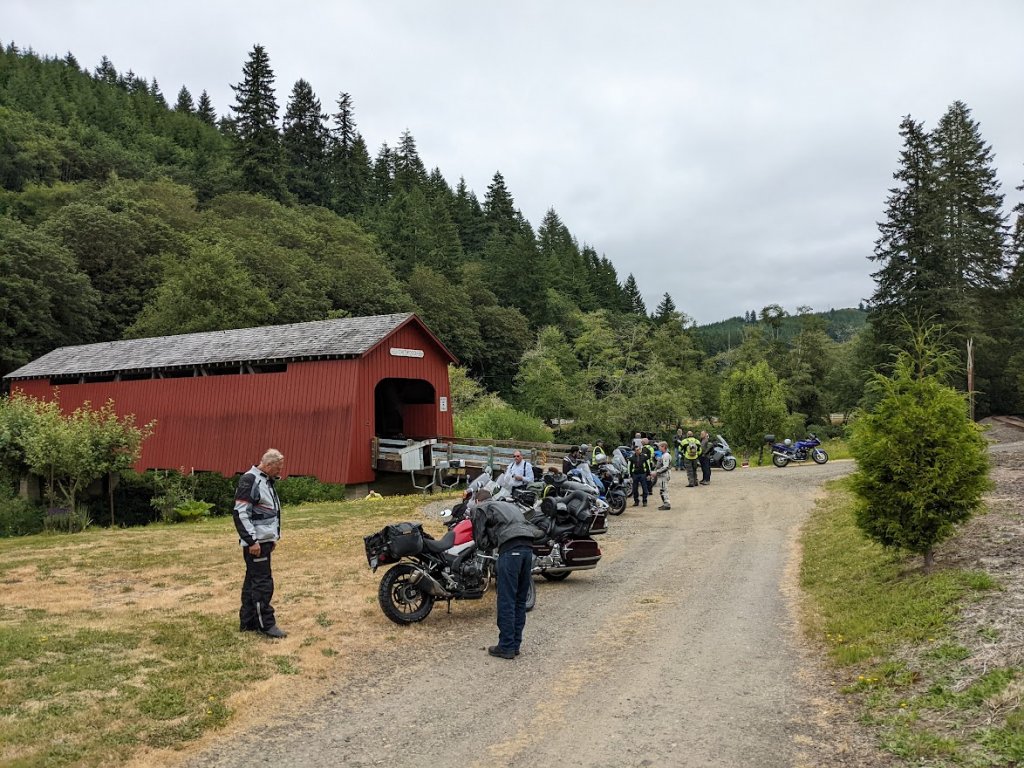 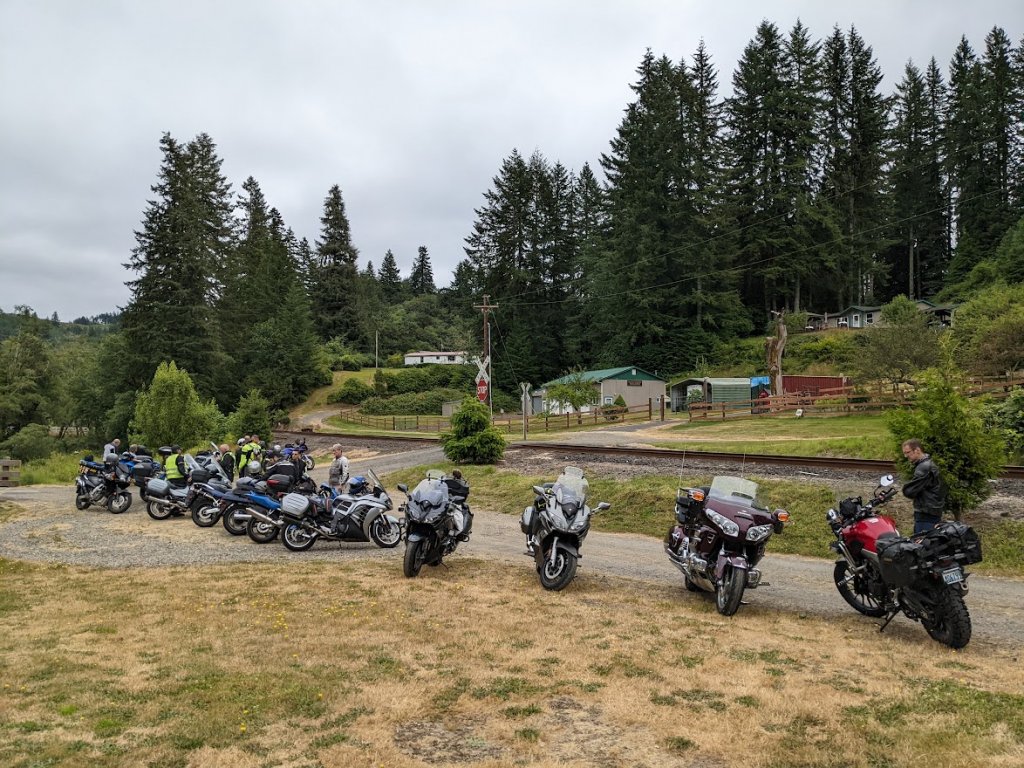 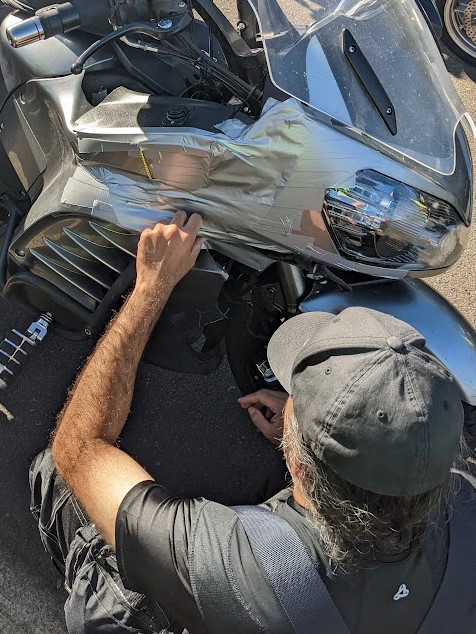 Member
Thanks for planning and leading this ride Aaron! It was my first time seeing the Oregon coast and we rode some fantastic roads to get there. On Sunday I rode the 504 up to the observation area at Mt. St. Helen’s. I had a great trip!